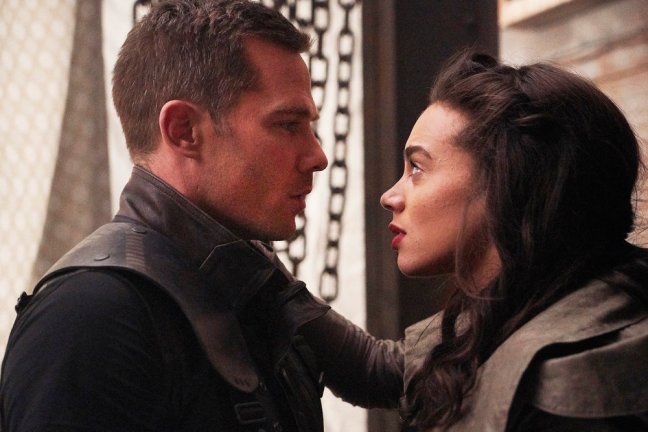 Killjoys’ patented economy of storytelling means that we were never going to spend half a season in bizarre-o Westerly, but what a ride these past two episodes have been right? A lot of clever things happened in “Blame It on the Rain.” Killjoys gets to revel in the characters and their connection to each other because they’ve done so much to build a fully functioning universe with an appropriately universe-ending threat. We get a brief reminder of what a black warrant is when Johnny asks Pree about it, but the emotional impact of it is immediate because we remember Big Joe and Johnny’s time as a fugitive.

The Lady’s improvisational skills are pretty tight. Her new scenario where Dutch is a terrorist for hire called “The Widow” has just enough of Dutch’s real past that viewers can see how The Lady manipulated memory to fit a reality that serves her purposes. She sicks all these inept killjoys on Dutch, but Johnny is the only one who thinks to look in the restricted and unpatrolled alley. I head-cannon that there were barely anymore killjoys, so most of the people given the job in fantasy Westerly were miners and random vagrants before The Lady pulled the whammy on them.

The Lady took some L’s this episode, but she also made some huge come-ups. Dutch successfully murdered a number of her hatchlings, sending her into a ship-shaking fit of rage. However, she was able to upgrade her body and intimidate Khlyen all in one gesture. Most importantly, she was able to apprehend her three most formidable foes.

As Adam Barken, Killjoys’ showrunner, remarked on Twitter, the part of The Lady “was a major role that could go very wrong. But from day frickin one, without a note from us, Alanna absolutely killed it.” Alanna Bale’s performance of alienness is compelling and so is her projection of smug superiority as she delivers lines about humans having a confidence born of generational ignorance. This is another casting victory for the show as Ms. Bale stands toe to toe with veteran actor, Rob Stewart and acquits herself admirably.

Even though this embodiment of The Lady is new, this character has been built up since Season 1 if you count all of Khylen’s vague but dire warnings in the beginning. This is the entity who sowed seeds of distrust between Aneela and Khlyen while the former was unraveling into madness and the latter was trying to figure out how to help her. She is the reason Khlyen cut bits of prefrontal cortex out of Aneela’s head and spirited them away. The Black Root who serve The Lady were responsible for keeping Khlyen in check while he waged a guerilla war from within her ranks. History. They got it.

Stewart has stayed booked and busy since the mid-1980s, and he is infinitely watchable whether he’s playing a big city blowhard or an elegant 200+-year-old killing machine and concerned father. Khlyen’s arc has been a joy to track since the pilot. What once seemed like a La Femme Nikita situation unfolded in an unexpected and riveting way. All of the preparing and planning, the stripping and transforming of Yala was the only way his hullinized mind could conjure to protect her, but it drove her away and nearly destroyed her.

I am so grateful that Khlyen came back as a living memory. It’s fitting thematically because that’s essentially what Dutch is, and he should be here with her at the end. Now that Khlyen is back to being human, he’s able to feel all the ways he failed both Aneela and Yala. He still has gravitas but the worry in his eyes is new. He’s used to being listened to and even feared so Stewart carries that into his performance as well. The relationship between Khlyen and The Lady will prove to be interesting moving forward.

Just as things are heating up in Antagonist Alley, Team Awesome Force come together like Voltron. Dutch is completely inept at field triage and that seems surprising given her line of work, but it’s kind of nice that she’s shit at something. I am reminded of the second season’s “Meet the Parents” when she haphazardly closed D’av’s gaping torso wound with a surgical staple gun while Khlyen was inhabiting him. Her duct tape solution in “Rain” makes that look like elite medical care.

Dutch and Zeph work scrappily to come up with a pretty genius plan to clear Johnny and D’av’s minds. There is a great moment when Zeph uses the protein inhibitor to block the effects of the memory-encoding rain. A lesser show that thrives on angst for its own sake would have kept Zeph resentful of Dutch about Pip’s death once she woke up. We would have watched her sweet funny crush on Dutch wither while she grimly agreed to help because the stakes were too dire for her not to.

But in a pleasant turn akin to Dutch and Aneela calling a truce in the Season 3 finale, Zeph places the blame for Pip’s death squarely where it belongs: The Lady. They share a touching hug and continue to love one another because that’s what this show is about at the end of the day.

Speaking of love, Yalena “Dutchess” Yardeen Kin Rit and D’avin Jaquobis are a ship that I will never forget. Long after season 5 ends and new, pretty sci-fi takes up residency in my brain, I will remember Killjoys and the sweet, silly, painful, honest, fraught, destructive, rehabilitative, sexy love of Dutch and D’av. When she leads him down the Side Street of Hanging Linens and Gauzy Romance and asks him, “Who am I to you,” it comes off like a lyric. The way she moves toward him and melts his resolve with each step. There is no fear in her. She knows him. She knows she’s safe with him. That kiss. Sure it’s a clever way to pass on the next plot point and get everyone to converge at the factory, but it’s also so much more than that.

When Dutch, D’av, and Johnny are all awake, they don’t miss a step. They immediately go about their synchronized ass-kicking and quipping. When D’av calls Dutch his girlfriend I squeed. I’m not going to lie to you; I’m not going to lie to myself. Johnny is all smiles now, but he did spend over a month as Dutch’s pretend-husband. I wonder what the ongoing fallout of that will be.

Overall, this felt like the second of a two-part premiere. Now, with TAF awake but captured, where do we go from here? Something tells me things are going to get intense next week. How intense? Well, check out this clip from next week: